Home»CRAZY»Man Will Pay $100,000 to Have Sex with Grizzly Bear
CRAZY/WTF

We all know about trophy hunting, but there is apparently another kind of trophy hunting that involves rich men who pay to have sexual relations with exotic animals.

A man allegedly named Walter Kernel sent this email to what is believed to be a well known Russian gangster, searching for a sexual experience with a bear, a grizzly bear. 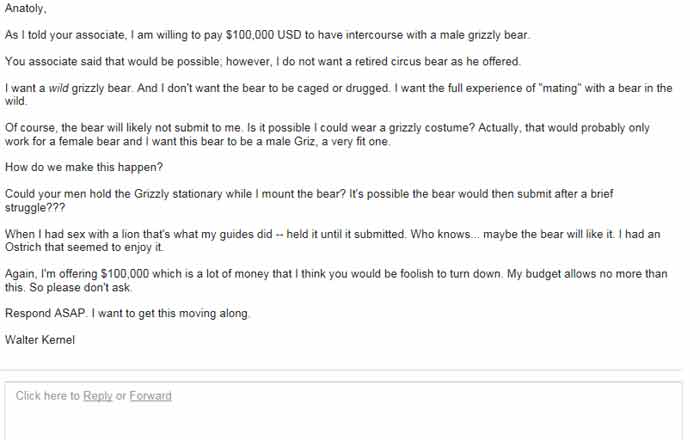 As I told your associate, I am willing to pay $100,000 USD to have intercourse with a male grizzly bear.

You associate said that would be possible; however, I do not want a retired circus bear as he offered.

I want a wild grizzly bear. And I don’t want the bear to be caged or drugged. I want the full experience of “mating” with a bear in the wild.

Of course, the bear will likely not submit to me. Is it possible I could wear a grizzly costume? Actually, that would probably only work for a female bear and I want this bear to be a male Griz, a very fit one.

How do we make this happen?

Could your men hold the Grizzly stationary while I mount the bear? It’s possible the bear would then submit after a brief struggle???

When I had sex with a lion that’s what my guides did — held it until it submitted. Who knows… maybe the bear will like it. I had an Ostrich that seemed to enjoy it.

Again, I’m offering $100,000 which is a lot of money that I think you would be foolish to turn down. My budget allows no more than this. So please don’t ask.

Respond ASAP. I want to get this moving along.

We have no idea if authorities are searching for Kernel. It is believed he is a U.S. citizen.

But good luck with shagging this trophy Mr. Kernel!! I hope the bear rips you to shreds!!