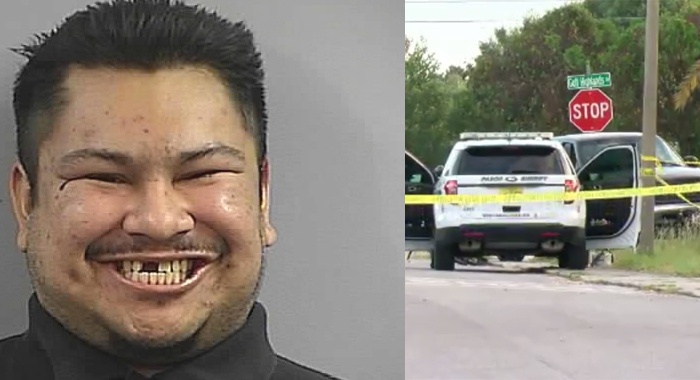 Brian Desario, 30, shot and killed a 56-year-old friend of his mother’s for having sexual relations with his girlfriend, an imaginary girlfriend.

Desario’s mother called police and, after their arrival, a shoot out with Desario erupted that closed one nearby Elementary school.

Sheriff deputies eventually backed off and tried to negotiate with Desario but he kept repeatedly shouting “John performed adult acts on her! He ate her pussy!”

Unable to make any headway, police sent in a bomb robot who found Disario dead from, what authorities suspect but have yet to officially confirm, the ingestion of ‘house hold chemicals mixed with beer.’

Police found stacks of Desario’s writing that included a manuscript of children’s poetry and hundreds of rage-filled letters to his imaginary girlfriend.

“Desario’s “girflfriend” allegedly had moved to Paris to be a lips’ model. That’s where they just use photos of your lips in ads, nothing elese,” an arresting deputy said. “And Desario had been writing letters accusing her of cheating on his him with black Frenchmen who were also models. Then somehow, the imaginary girlfriend wrote back and said she wasn’t actually living in Paris, but in the shooting victim’s apartment in Hudson getting oral sex twelve times a day. This suspect is obviously insanely mentally ill.”

Disario reportedly had a long history of mental illness that often caused violent outbursts. Investigators said Disario managed to stockpile weapons and ammunition, including a shoe box of grenades, but they aren’t sure how.

*Mugshot used is from a previous arrest*

VIDEO: The Craziest Cat Vs. Dog Fight of All-Time...