Bobby Andreas Heck, 41, faces an array of charges including assault with a deadly weapon, resisting arrest and animal cruelty. 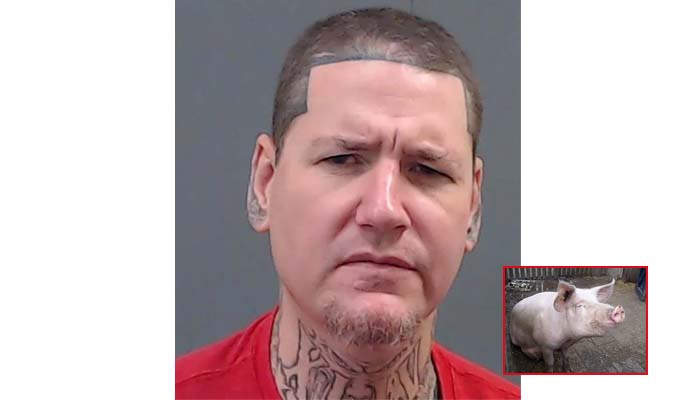 According to the arrest report, Heck entered his family’s residence in the 4900 block of Forrest Creek Drive and accused his pet pig, Mr. Oinkers, of ‘trying to control his mind.’ He threatened to turn the pig into bacon and stabbed the pig in the rump.

Heck’s father, who he shares the residence with, tackled Heck from behind in order to save the pig. Heck then stabbed his father in the buttocks and fled.  Police were called and searched the neighborhood for Heck eventually finding him holding his breath in the bottom of neighbor’s swimming pool.

“It must be some kind of record for how long he held his breath underwater,” one of the arresting officers stated in the police report. “I don’t think it was as long as ten minutes, but, heck, it had to have been at least six minutes, maybe seven. We were all amazed.”

A police officer entered the pool and, after some struggle, pulled a kicking and screaming Heck out. Heck continued to fight and was hit with a stun gun making it possible for officers to complete the arrest.

Heck told police the pig had repeatedly been hypnotizing him in order to control his mind. He said the pig wanted to use Heck to kill other pigs.

Both Heck’s father and the pig survived and are recovering, according to hospital staff.