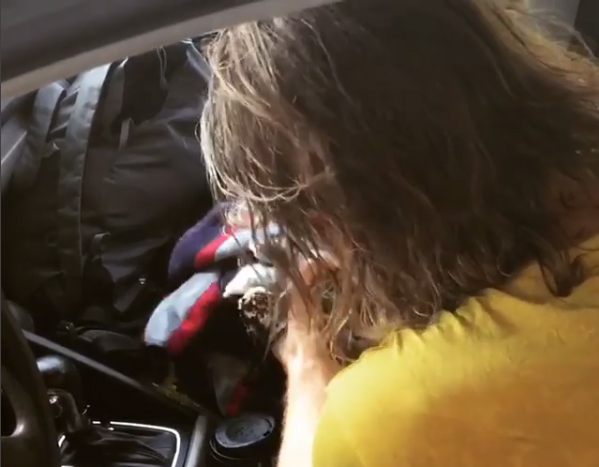 Backcountry endurance runner, Kelly Broich, was running in the Idaho mountains when when he saw an odd-looking bird standing under a small bush.

“At first, for the briefest of seconds, I thought is that a chicken?” Broich told Idaho Mountain News. “Then I realized it was a bird of prey — a hawk fledgling.”

Broich called out to it and the bird waddled away. He eventually decided he needed to catch it.

“I knew it had fallen from its nest and there was obviously no way its mother would be able to get it back into the nest,” Broich said. “When I walked up to it, it turned and opened its mouth to be fed. I carefully grabbed it from behind to avoid possibly getting bit. I brushed off the ants that were covering it and it looked fairly healthy.”

Broich was 30 miles deep in the rugged Idaho mountains and was worried the bird might fight to get away on such a long trek out.

“I had just read an article about falconers and knew they use hoods to cover a bird’s eyes. It instantly calms them. So I took an extra shirt I had and gently wrapped the little guy in that and he was instantly calm. Was a long trip out, but he was fine.”

Broich drove two hours to get the orphaned hawk to a bird rehab center in Boise. The bird was dehydrated, but will make a full-recovery and, once grown, will be released back where it was found.

“Kelly saved this hawk’s life,” Nancy Jones, a Birds of Prey rehab and rescue specialist said. “When they leave the nest, they do not last long. Really glad we have such kind-hearted heroes like Kelly looking out for distressed animals.”

See a short video of the baby hawk!